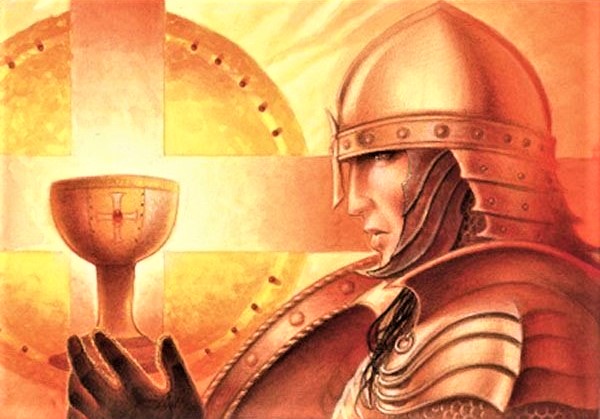 Our Saviour is incredibly pleased to have you join us for live in-person worship inside the Nave and Sanctuary on Saturday, October 16 at 5:30 pm (casual with Voices of Praise), and Sunday, October 17 at 8:00 am (simple service) and 10:30 am (traditional with choir and/or organ music). The Saturday evening and Sunday 10:30 am services will will also be online via Facebook Livestream!

Sunday 9:00 am — Sunday School for All Ages (including adults)

Sunday 10:30 am — Traditional Service with Choir and/or Organist

When I was a boy, people would ask what I wanted to be when I grew up.  This being the era of the Space Race and the Cold War, I wanted – like any red-blooded American child — to be an astronaut or a secret agent. But if that failed, I had a backup plan:  I would become a knight of the Round Table.

Sword fighting, slaying dragons, rescuing damsels in distress: It looked like the greatest job in the world, filled not only with adventure but with virtue. So, I was disappointed to learn, in a college course on medieval literature, that actual knights were an unpleasant bunch: violent, cruel, hated and feared not only by their enemies but also by the ordinary people whom they oppressed as much as they protected.

Power corrupts, as Lord Acton said.  Which is why when the followers of Jesus started dreaming about the power they would wield in his kingdom, he may have shuddered.  James and John, humble fishermen, had a fantasy about sitting at his right hand and his left, like the favored advisors to a king, like the Chief of Staff to a modern president.

Oh no, Jesus told them, as he tells us.  That’s not what it is about at all.  Greatness in my kingdom is not about giving orders and having other people obey you.  Greatness is about service to those very people.

He had said before that “the first would be last” – we’ve heard it twice in the past few weeks.  Now he put it more strongly still:  in his kingdom, the leader will be, not just the last to be served mind you, but – the leader will be the servant of all. The slave of all.

Jesus himself is the first and last – the Son of God, who suffered and died like a criminal.  He is, to Christian ears, the Servant about whom Isaiah had spoken centuries earlier, the one who was beaten and abused in our place: wounded for our transgressions, crushed for our iniquity.  And somehow, his suffering has set us free, reconciled us to God, for (quoting the prophet again) his was the punishment that made us whole, and by his bruises we are healed.

Hebrews speaks in the same way about a High Priest who knows our sins because he is also one of us; this, it says, this very compassion – knowing our weakness from the inside — is what makes the great Priest’s sacrifice so powerful.

We Christians are not called to be what Jesus is – we cannot suffer for the redemption of mankind, nor need we since it has already been done. But we are called to follow his path, and to find our highest honor not in commanding others, but in helping them.

So, I wanted to be a knight of the Round Table.  Not a real-life knight, a violent man who frightened the people around him, but a fairy-tale knight like Lancelot, a protector of the weak and liberator of the captive. They are great role models for a little child – or, perhaps, for us who are not so little.

And perhaps the greatest of them all was Sir Percival, the Knight of the Holy Grail.  His story has been told by many writers – by Chretien de Troyes, by Wolfram von Eschenbach, and by the foremost Arthurian bard of modern times, Monty Python.  I am personally fond of an adventure movie from the 1980s called Excalibur – a decent picture, marred by Merlin’s silly sliver skullcap but then elevated by its haunting version of the Percival story.

The brash young knight has traveled far seeking the chalice from which Christ and his apostles drank at the Last Supper, said to grant the power of eternal life.  His quest has come to nothing, and he returns, to what was once a green and pleasant valley, but which has turned gray with poverty and plague.  Camelot has failed.  Arthur is dying. Common folk shamble around like the living dead. And to their eyes, a cocky knight in armor is a hateful thing, a sign of shattered hopes and broken promises, of Arthur’s own arrogance and folly.

In a fury, the people surround Percival, and throw him into a rushing river. Dragged by his armor, he nearly drowns; with his last bit of strength, he shimmies free and breaks up to the surface – a knight no longer, just a man like any other, except that he is naked and dripping with the waters of a sort of new baptism. (Okay, they out a towel on him to keep it PG).

It is then, stripped of his outward protection, no longer separated from other men but now just like them, that the naked knight is able to see what he had never seen in all his travels.  The Grail is there, its healing power is right there with him, simply waiting to be taken up by one who is not proud but humble, and who does not want to live forever, but simply help others to live.

Percival shares the cup with those who need it, and they are made whole – the king, the land, the people are all made well. And why can he do it now, stripped of his knight’s gear?  Because now he is part of them.  Made wise though compassion, he has finally reached the end of his long quest.

Now beloved:  this is a fairy tale.  The Holy Grail is not real; it has no place in history or church teaching.  It’s just a story. But I love the story because it teaches me about following Jesus.

Many people seek God on mountaintops or gloomy cathedrals, others claim to find him in a book or a prayer or even a drug. But we believe that in Jesus Christ, God has come to us, has taken on our flesh and blood, our aching joints and bad digestion, our fear and even our death. God has become the weakest and most miserable among us – and that is where we will find him.

But not while we are still pretending to be heroes, leaders, experts or role models, no. Only when we strip off the armor and stand as we really are, as weak and sinful and as ordinary as anybody else. The new and deeper relationship with God and with each other begins when we reveal our true, authentic selves.  When we dare to be vulnerable.

That is when healing takes place, and when we are made whole.  That is when the dying world returns to life. Not in pride or entitlement, but in honesty and compassion – that is the greatness of Christ in us, and for the sake of the world.  Amen. 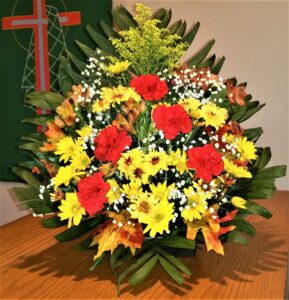 Altar Flowers for this weekend’s services were donated by Virgil and Barbara Brown in loving memory of their parents.