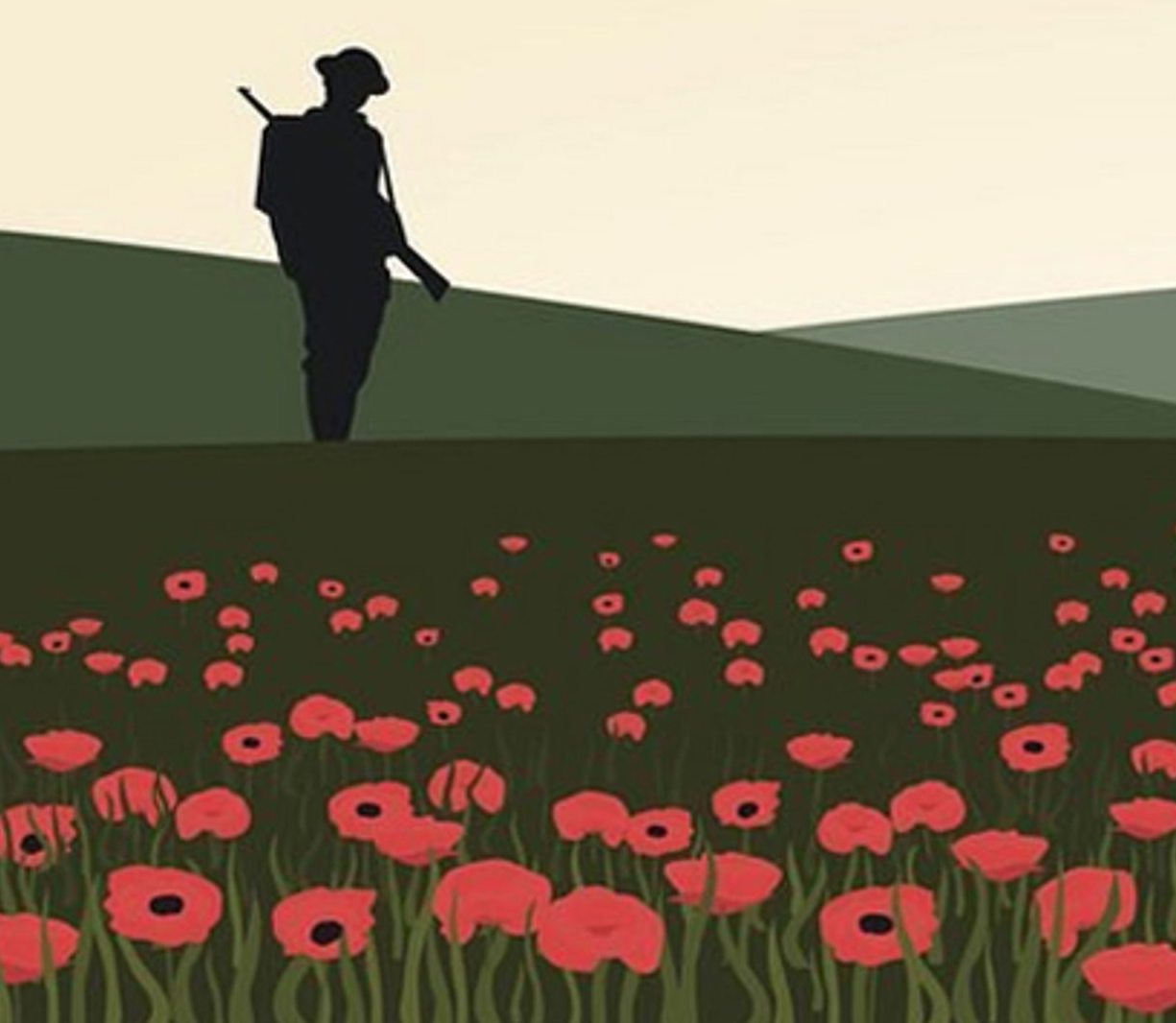 The first time I visited France, some thirty-five years ago, I noticed a curious sign posted on the Paris subway. In each car, next to a couple of seats, it said: “Reserved for disabled ex-servicemembers.” Well, that’s the translation. Really, the seats were reserved for mutilés de guerre, literally those who had been mutilated by war, who had lost limbs or eyes or organs.

Those simple signs were a sobering reminder of the fact that there were, all around us in those days, men and some women who, only a few decades earlier, had fought bravely to preserve the world from Fascism, and survived —but at a cost.

Of course, our Veterans’ Day observance has roots not in the Second but in the First World War. It was one hundred and one years ago tomorrow that the guns fell silent. The Great War had shaken the foundations of the old empires, redrawn the map. It had seemed like a chapter from Revelation – the end of their world.

Oh, that my words were written down, engraved in stone, says Job; or even on my flesh, though it destroy my skin. His friends have been telling him to give up hope, to admit that life is futile, to curse God and die. But Job stands up against them. Despite his miseries, despite his suffering — despite the cross he bears – Job trusts in something more. I know, he says, that my Redeemer lives. I believe, in other words, that beyond the cross and its threat of death lies the empty tomb, and its promise of life.

Job is a soldier, of a sort. Not like Samson or David, of course. He doesn’t struggle with the Philistines, but with doubt and fear, anger and despair. And at the eleventh hour, in the face of destruction, he stands up for goodness; he stands up for faith. You can almost hear the trumpet blow as he gives his battle cry, “I know that my Redeemer lives! And as I stand up now, so at the last day he too will stand beside me.”

In Roman times, a church member might be called a “miles Christi,” a soldier of Christ. The opposite was a paganus, a pagan – which meant a country person, but became Roman Army slang for a civilian. So to be a Christian meant to join up, enlist. But you didn’t have to be young and fit; you could be old and bent over, blind and crippled; a child or even an infant. The Christian soldier did not fight, does not fight, with swords and armor, but with the weapons Job used: faith and hope.

Christians are, in our metaphorical language, soldiers. So are the angels; that is what St Luke calls them, in the Christmas story: the “heavenly host,” of the Christmas story is more literally “the army of the skies.” They are God’s Airborne Rangers, who show up at the eleventh hour, as the world hangs on the edge of doom, to announce a new treaty with God – an armistice. Peace and goodwill!

Angels come back in story we just heard, where the Sadducees – wealthy religious traditionalists – come to Jesus with a strange hypothetical about a woman who married seven men in a row, and whose wife was she in the resurrection. This is the sort of nitpicky misses-the-point legalism for which Jesus has no use, and he simply mocks them. You see, the Sadducees didn’t believe in the Resurrection of the dead – and they didn’t believe in angels, either. So Jesus says, “Well, in the resurrection, we will all be like angels.” Get it, guys? I’m ignoring your nonsense.

Then he moves on to his real point, which is new life. God is the God of the living, he says; so stop worrying about the dead. Stop playing games, stop troubling yourself about dead people and imaginary people and hypothetical people, and start paying attention to what matters– loving God, loving each other. Jesus is a little like Patton slapping a shell-shocked infantryman. He says “Wake, up, soldier, we have a war to fight.”

But of course, the war we fight, with Jesus by our side, is not a war of tanks and missiles. It is a war within each soul, where it is always the eleventh hour, where every day is a battle for survival.

Being a soldier is hard work. That’s true of the metaphorical Christian soldier. It’s true of the grunt in the foxhole, too. Sometimes, paradoxically, they even trade weapons; sometimes, when people are behaving badly, the Church needs to become a sergeant, using the Law, the rules, as a way to bring them to the Gospel of repentance and forgiveness. And sometimes, even the toughest soldiers need to break their wartime habits, and seek peace.

Look at Army Reserve First Sergeant Seth Kastle. He served in Qatar, Afghanistan and Iraq. Then he came home to his family in Kansas, to his wife and his daughters. But he wasn’t the same man who had left; you rarely are, after a war. His little girls were scared and confused. So Seth wrote a story for them, about a family of lions. The Daddy Lion, he wrote, loved his family very much. But he had gone away to do some hard work, and had come home with a fire in his chest. It kept him awake at night, it made him forget things sometimes, and burn a little hotter than he should. It hurt him. Sometimes, because of that fire, the Daddy Lion seemed mad at his family, but he still loved them more than anything.

That story has been published; it’s called Why Is Dad So Mad?; you can buy it on Amazon. I read a review where another customer, a soldier with PTSD, read it to his own kids. And they got it – “Daddy, that lion has a fire just like you. But he still loves his family, just like you.” And as he put the book down, the man was crying, long slow tears.

Not every disabled ex-servicemember has lost a leg or an arm. Often, the mutilations are invisible to our eyes. But save a place for them anyway, not just in the subway but in your heart.

Nor can we see, by looking at the Christian beside us in the pew or the stranger in the street, what battles they have fought in their soul, what wounds they have suffered, what demons they have defeated. But save a place for them as well, for each other and for the stranger. And even with those who are hardest to love, remember this: the same God has saved us all. The same God has promised to stand with each of us, at the eleventh hour, at the last battle.

Preached by the Rev. Michael Church, at at Our Saviour Lutheran Church on 10 November 2019.