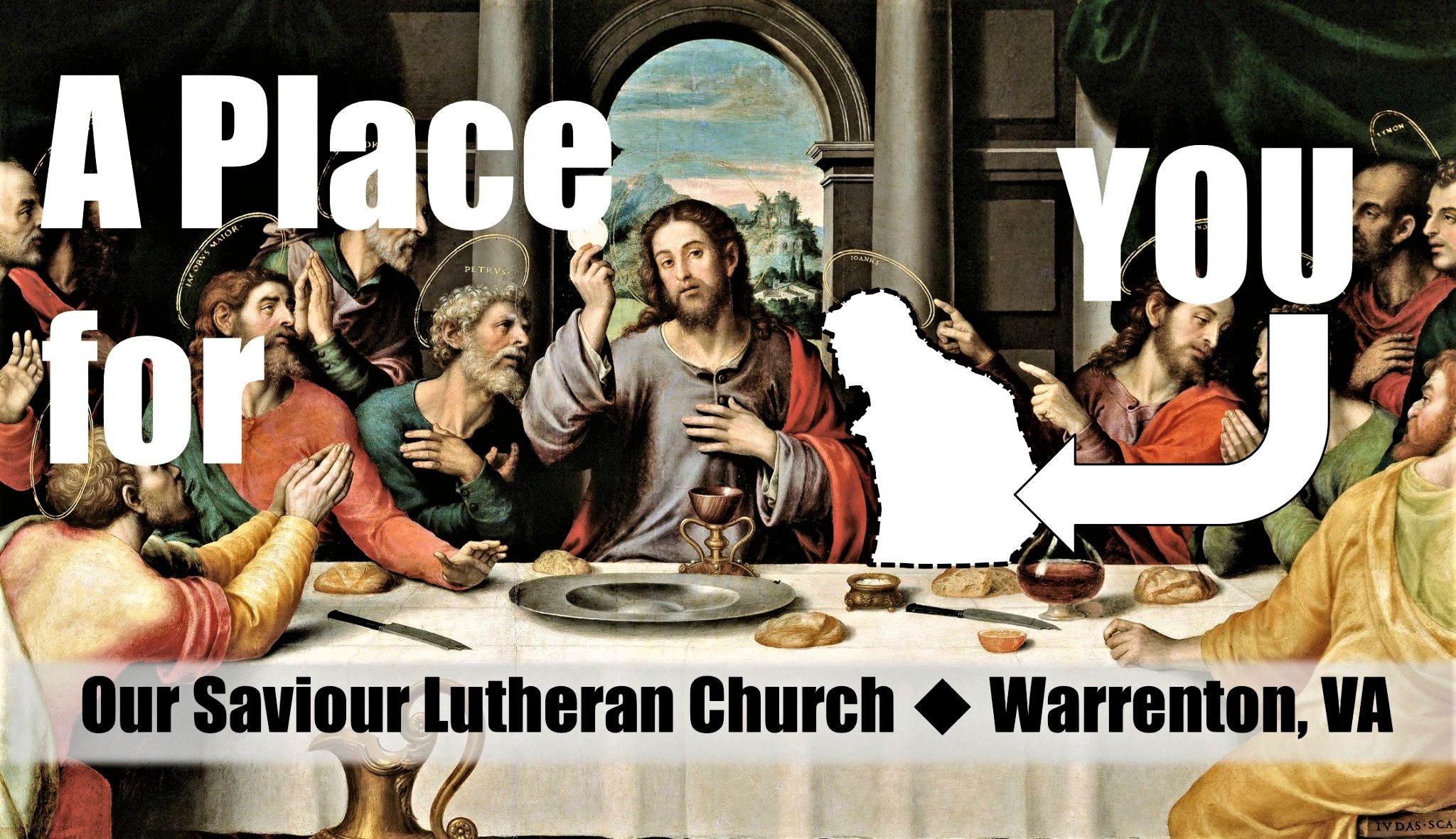 Our Saviour is incredibly pleased to have you join us for worship on Saturday, August 27 at 5:30 pm (casual with Voices of Praise), and Sunday, August 28 at 8:00 am (simple service) and 10:30 am (traditional with choir and/or organ music). The Saturday evening and Sunday 10:30 am services will will also be online via Facebook Livestream!

Join your prayers with the community! During the live stream of the service, you are invited to type into the Facebook chat any prayer requests for those you want included in the prayers of intercession. Please do this at the beginning of the service so that we can write them up and hand them to the pastors before the prayers start. (As always, you may also send your prayer requests by Wednesday the week ahead to office@oslc-warrenton.org.)

(Fast forward to 5:10 in the recording for the beginning of service)

(Fast forward to 3:42 in the recording for the beginning of service)

Altar Flowers for this weekend’s services were donated by the Steigelman family in celebration of the life of Melanie Nocera. ❤

A Place for You

A lot of ancient philosophy begins with a dinner party – a symposium, they called it, where gentlemen of leisure would recline on couches, drinking wine and talking about the Good, the True and the Beautiful.

Plato, Socrates – but not Diogenes, the philosopher from Anatolia who wandered the world, sleeping outside like a dog, mocking the powerful.  Nobody invited him to dinner, because he was a terrible, terrible guest.

Well, one guy invited Diogenes to a party.  A rich man, who wanted to show the wandering sage his marvelous villa.  It had polished marble floors, and frescoes and columns and –

Diogenes, uninterested, leaned over to spit on the floor.

“But that marble,” the rich man sputtered, “that’s valuable marble.”

“Spit in some other dirty place!”

At which point Diogenes looked at him, thought for a moment, and spat in the man’s face.

The moral of the story is never invite Diogenes to your dinner party.

It’s a strange and sort of disgusting story, which I tell only to remind you of what a big deal dinner parties were in the ancient world. A host showed off his wealth, and raised his social status. A guest was honored by the invitation, and also raised in status.

And of course, there were some people who did not get many invitations.  Poor people could never return the favor, so why invite them?  And in those days, “poor people” meant not just beggars but widows, as well as people with disabilities who could not earn a living – the blind, crippled, lame. Children. They all got left out of the social whirl, the party circuit.  Which must have hurt. Exclusion always hurts, doesn’t it?

Jesus, however, got his share of invitations.  He may not have had much social status – carpenter’s boy from the hill country – but he was a novelty, a wandering preacher who was quick with a joke and might occasionally turn some water into wine.  I suppose that’s why, after worship on the Sabbath, he was invited to a dinner thrown by the leader of the Pharisees.

That’s the setting for our Gospel story today.  Or rather our stories, because there are two of them.  And if you don’t mind, I want to look at them in reverse order.

The second story, or really instruction, is about who gets invited to the party.  As I said, these invites weren’t about friendship as much as status.  Each invitation came with strings attached, the unspoken expectation that the guest would pay you back, with an invite of their own, or by becoming one of your clients, or with a favor down the road. It was a kind of a economy. It was how the world worked.  In high society – in Hollywood, or in the Hamptons – I gather that is still how the world works.

But Jesus had no use for this idea of repayment.  Any Jew of his time would have been horrified by our modern economy, which runs on credit and capital.  Loans, mortgages, credit cards – those would have been against the law in his world. You could lend a person money and get paid back, but charging interest?  Exploiting their need? That was immoral, abusive, the way to tear apart your nation’s social fabric.  Christians saw it the same way for fifteen centuries, until the Renaissance.

That was all Jews.  Jesus goes beyond that, though.  He isn’t talking about interest here – nobody in the room thought that was a good idea.  He is talking about the idea of repayment.  If you give something to somebody, he says, then give it.  Don’t ask to be repaid.  Give, not because you are looking for something, but because it feels good to give, to help, to support your fellow creatures. Give the way he gave – if you dare – when he gave himself body and soul for the life of the world, and asked us for nothing in return.

Now that second story is pretty intense.  The first, about who sits in the place of honor, seems trivial by comparison. It’s hard to believe Jesus really cares about this.  I mean, the Lord of Heaven comes to earth and he wants to talk about … seating charts?

Beloved.  The Lord is not talking about seating charts and competitive neighbors.  He is talking about himself.  His mission, his ministry.  His life and death and victory over death.  Jesus humbled himself by taking on our flesh and its weakness; he humbled himself by dying a criminal’s death on an instrument of torture.  And he was exalted – lifted up from the grave, lifted up from earth, to reign again from heaven.

The highest of the high has, for our sake, become the lowest of the low.  But now he is exalted; now he rules, even if his rule is not yet fully visible.

Because he sits in the place of power, he can invite us to his banquet.  All of us. Not the righteous or the deserving.  Not the good or the kind or the pretty or the pious.  All of us.  The dirty and the defiled, the doubting and even Diogenes, the guest who spits in the face of his host.  All of us.

You – whoever you are, whatever you have done – have a place here.  The worse you feel about yourself, the less the world thinks of you, the more secure that place is.  If you have been cast out by your family, Jesus is your family now; if you are lonely, he is your friend.  There is a place for you, a place of honor – the place card reads “community and purpose,” the party favors are peace and joy – a place for you at the greatest celebration of them all, the feast of victory for our God.