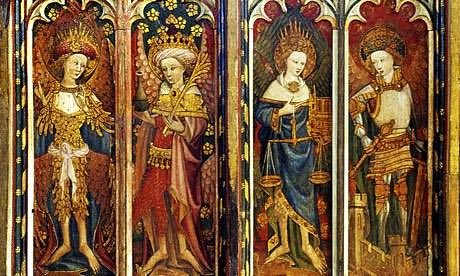 Old European churches were built with something called a chancel screen — a sort of wall that separated the place where people sit from the area around the altar. This meant that during communion, you could not see what was happening. I’m sure there was a reason for this, which made sense at the time. But we know, from looking at the screens which have survived, that ordinary people didn’t like it. They wanted to see.

So they cut holes in the church furniture. (I do not recommend this, by the way).

All over England, you can still see medieval screens, with little holes (called squints) drilled into them, so people could kneel down and look through. They wanted to see the altar. They wanted to see, especially, the moment when the minister raised the up bread to say “Take and eat; this is my body.” They would come running for that, pile on top of one another, to see the moment that Christ became present according to his promise, the moment that God came into the room. Even on your knees, with another smelly peasant leaning over you, squinting through a little hole in the wall, you wanted to see that.

But maybe you didn’t want to get too close. There were old stories about people looking at God directly and being blinded or driven mad. Maybe God’s presence was just a little dangerous, so the wall offered protection – and the squint let them see as much as they could stand.

In a sense, the story of Christmas, the story of the Lord’s birth to a virgin, witnessed by the shepherds and angels and wise men, this story is for us like one of those little spyholes in the wall. It is a way to catch a glimpse of God, to behold the Word made flesh, in the safe and familiar form of a baby, tender and weak and crying out for blankets and comfort and his mother’s breast. Christmas is a chance to perceive God in a form our minds can handle.

There is a story about a parish priest who set up a Nativity scene in his church, with elegant and expensive figures of Mary and Joseph and all the rest. But on Christmas Day, he saw that the infant Jesus had been taken from the manger. He shook his head sadly; such vandalism is all too common. Then that afternoon he saw a little boy dragging a red wagon down the sidewalk — and lying in the wagon was the figure of Jesus! The priest ran over asked him, “Where did you get that infant?”

The boy answered innocently, “I took him from the church.” “And why did you take him?”

“Well sir, about a week ago I prayed to Lord Jesus. I told him if he would bring me a red wagon for Christmas, I would give him a ride around the block in it.”1

running, each Christmas; we gather in reverence and squint through the tiny window of history, trying to catch a glimpse of God. Sometimes, in a world of violence and poverty, of hatred among nations and even among religions, it seems that the only way we can find God is by looking backward, because he is so hard to see in the world around us.

But then sometimes he is not. This year at Our Saviour, I have seen God walking beside people as they struggle against cancer, or fight to save their marriages, work themselves to the bone to make a life for their children, and as they mourn their dead. I have seen God at work when newborns are brought to the water of baptism, when lovers exchange marriage vows, when hungry people are fed by the hands of love.

If you are looking for God in your own life, if you want to find a place where God is working, my friends, there is no better place than this. Welcome home.

But God does not only work in the Church. The whole world saw God’s power last week, on a bus in Kenya. The terror group called Al Shabab stopped the bus, mostly full of women, and demanded that the Muslims and the Christians separate — so that, as they had done before on the same country road — they could gun down the Christians.

But do you know what? The passengers would not separate. They stuck together. The Muslim women even lent scarves, hijabs, to their Christian sisters. We are all one, they said; one nation, one race; kill us all or leave us alone.

And the bad guys left them alone. It was what my wife calls a God-sighting, a display of love, of community, of people who care about each other and who choose life not only for themselves but for the world.

Last year this time I talked about how Christmas is like Mary’s womb, which held the immensity of God. When I said it was bigger on the inside, some of you thought you heard a little reference to popular culture. (I just thought I was paraphrasing St. Hildebert of Tours.) But now I am talking about what God’s immensity means when it breaks forth from the womb, and is let loose in the world. Now I am talking about what happens when the force of love runs wild, to dispel the phantom menace of sin and separation; what happens when the force that made the world awakens — when the force awakens and the world has new hope.

But here’s the thing about the power of God’s love. It is not just mighty, but also beautiful. And sometimes our job is not to run around making the world a better place, but just to sit and gaze in wonder at the world God has already made for us. Protecting the innocent, feeding the hungry — this is one side of Christian spirituality. But there is another side, as well. Some churches, some pastors, do not do this second side justice. We are good at mission trips and food pantries, but not so good at teaching people to follow the Psalm (46:10), to “be still and know that I am God.” We get so caught up in doing things for God, we do not take time to see what God is doing.

And what is Christmas, if not a chance to stop and stare at what God has done? This means calming yourself down. It means separating yourself from the hustle and bustle, the shopping and parties and people you want to take care of, to find the moment of stillness in which God takes care of you. Call it contemplation or call it centering prayer. Do it by hiking a mountain, or do it kneeling to watch the elevation of the bread.

The Buddhists say, “Don’t just do something — sit there.” And I say, in a world of going and doing, that Christmas can be a time to sit on the straw beside the manger, and gaze in adoration at the light — at the love and mercy, at the peace and joy — streaming from the newborn child.

1 This story, of unknown origin, is often told about a certain “Father John” at St Peter and St Paul, in Kent; but it is also the heart of a Dragnet radio episode from the 1950s called “The Big Little Jesus.”