Our Saviour is incredibly pleased to have you join us for live in-person worship inside the Nave and Sanctuary on Saturday, October 29 at 5:30 pm (casual with Voices of Praise), and Sunday, October 30 at 8:00 am (simple service) and 10:30 am (traditional with choir and/or organ music). The Saturday evening and Sunday 10:30 am services will will also be online via Facebook Livestream!

(Fast forward to 4:20 in the recording for the beginning of service)

(Fast forward to 5:46 in the recording for the beginning of service) 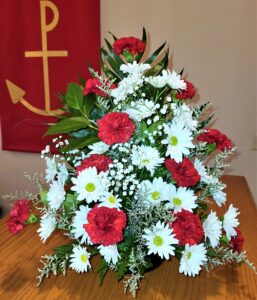 Altar Flowers for this weekend’s services were donated by Frank Gilliam in loving remembrance of his wife Carol. ❤

The Justice of God

“Now the righteousness of God has been shown to us,” wrote St Paul to the church in Rome. And fifteen centuries later, Martin Luther was terrified.  The righteousness of God – the justice of God, you can translate it – seemed more terrible than the sentence of even the most corrupt human courtrooms. Because God, he had been taught, was not corrupt, but a pure and perfect judge, who could seek out each person’s slightest moral failure, and deliver upon it a final and pitiless sentence of death.

Luther confessed his sins and confessed his sins, but they never stopped coming, fresh each morning. So he lived in fear, that each day’s harvest of arrogance and anger, of doubts or even of true existential despair, was a crime, for which the heavenly D.A. would prosecute him, and for which he would spend eternity where sinners deserve, which was in Hell.

Maybe you have been taught something like this.  I hope you have not; and if you have, I pray I was not the one to teach you. But I know that, all around us, there are people who have been taught, from childhood on, that God is a burning ball of celestial wrath, of whom they should stand not just in holy awe, but in a constant state of mortal dread.

“Obey the Commandments” is just the beginning. I know women who have been taught how to dress – long skirts, heads covered, never ever pierce your ears – if they ever want a home with Jesus. Worse, yet, they have been taught to stay in loveless marriages, even to violent men, because some preacher thought divorce was a sin.

Among my friends, not you but my friends outside the church, more people than I can count despise Christianity. Why? Because they have been taught that it preaches hatred for them, and proclaims their spiritual doom.  Jews and Muslims who recall the pogroms and Crusades; but also a gay teen ager who has been kicked out of the house by supposedly Christian parents, or forced into kinds of “therapy” that owe less to modern science than to medieval torture. And why?  Because somebody, somewhere, heard the story of a stern and righteous judge, whose word was law and whose sentence was death.

Most of this stuff has less to do with the Bible than with a society that wants people to conform, and uses religion as a tool to compel conformity.  But people hear it as if it were God’s Word. So no wonder they are resentful. That’s the story Martin Luther heard.  So no wonder he was frightened.

Until that day in the tower of his monastery – we don’t know the day exactly, but he was already in his thirties – when years of prayer and meditation and Bible study paid off, and he grasped that truth that St. Paul had been pointing to all along.  The righteousness, the justice, of God has been revealed to us not as a threat, but as a promise.  It has been revealed to us – given to us — as a gift, not so that we may condemned because we are so bad, but so that we may be set free because Jesus is so good.

This, beloved, is the center of everything we say and do here:  Jesus is good. And because he is so very good – because his goodness spills over like water pouring across the lip of a cup when you leave the tap running – God takes that flood of goodness and washes us clean in it.

Washes us clean, we say in church; Jeremiah the prophet said the same thing differently, God “will forgive our iniquity and remember our sin no more.”

Jesus said it most simply:  He came to set us free – and if the Son makes you free, then you are free indeed.

That’s the Gospel.  Not a bunch of rules, not a message of sin, not some preacher with too much hairspray pounding a pulpit and shouting “Turn or burn,” by which he means “Conform of die.”

Last week, Pastor Himes and I were talking about the Gospel, and how it sets us free.  He quoted a theologian who once said that if the Gospel were truly preached, often and clearly, and if people understood it, the effect would be like a nuclear bomb going off.  It would blast away centuries of prejudice and oppression, blast away lifetimes of fear and resentment, blast away all the things that make people feel lousy about themselves and about God and about life.

He’s right.  It would be like a bomb.  Only it would be better, because a bomb can only destroy.  The Gospel does more.  It builds up. First it flattens the idols, but then it creates something new in their place.  A bomb, the kind of which nations build far too many, can only kill.  The Gospel, and the Gospel alone, can give new life.

That is the power of love. And Reformation Day is not so much about Luther’s theses, or about Luther himself, or about what it means to be Protestant or Catholic or anything else, as it is about this one simple assertion:  God loves you. And God loves your neighbor, the one who is different from you, and whom you don’t really like. God loves you both, deeply and passionately.  Passionately, as in the Passion of Christ, the Cross on which God gave everything as a sign of love, on which the Son of God died so that you and I and everybody else who needs it could have new life.

That is my sermon for Reformation Day:  Out of righteousness, goodness, love, God has given you a new life.  Now live it. Live your new life, to the glory of God. Amen.