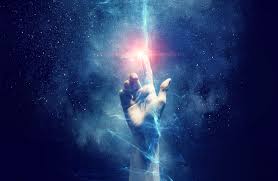 On a summer night just before the first grade, my mother woke me up and led me downstairs. My younger brothers and my sister must have joined us, but I don’t remember. I do remember that my father had made cream puffs, my favorite dessert, but that on this particular might he insisted that we call them Moon Puffs.

And I remember sitting in front of our small black-and-white TV, with tin foil on the antennas, struggling to make out a scratchy image broadcast from ever so far away. This was the night, fifty years ago this week, that human beings first set foot on the surface of another world: the night of the Apollo 11 moon landing.

In those days, I wanted to be an astronaut when I grew up. We all did, I think. It seemed like we were at the starting line of a race to the stars, an age of exploration like the European rush to the New World. We marveled, in those days, at the majesty of the universe and at the daring men and women who would explore it.

What I did not know then was that, in the hours before the lunar module opened its doors, as it sat silent on the lunar surface, astronaut Buzz Aldrin took from a cloth sack a silver chalice and some wine, a plate and some bread, and with the full understanding of his church back home, which had ordained him as an elder, he celebrated Holy Communion.

Holy Communion on the moon. It is a reminder, I think, that the urge to explore, to solve the mysteries of nature, has always been paired with the religious quest to understand the mysteries of God. After all, the One who made us in his own image made the sun, the moon and the stars; surely they reveal something of their maker, just the way a painting reveals the mind of an artist.

St Paul says that Jesus himself is the perfect image of God, who was part of the first Creation, and who now holds all things together. This called the Cosmic Christology, which sounds like a thing the hippies who raised me would have said – cosmic, man. But it is cosmic. Jesus is not just a carpenter with some spiritual insights, but the very God who made and now sustains the entire universe. The God-Man is in Luther’s word ubiquitous, both deifying and humanizing the cosmos. This is not, of course, what we moderns would call a scientific claim. It is a philosophy, and one that puts Christ — meaning the incarnate God, or meaning self-sacrificing love, take your choice — at the center of everything.

But in ancient times, and indeed right up until a few centuries ago, what we call science and religion were both considered branches of a single discipline: philosophy. People who studied one study generally studied the other as well; both sought to see God’s face, only in different ways. Think of Aristotle, for instance. And they often expressed their speculation in rich poetic language; consider Plato’s Timaeus.

St Augustine, in 4th-century Africa, wrote that about “the Book of Nature” as a way to understand God’s will. In one place, he compared it directly to the Bible:

Some people, in order to discover God, read a book. But there is a great book: the very appearance of created things. Look above and below, note, read. God whom you want to discover, did not make the letters with ink; he put in front of your eyes the very things that he made. Can you ask for a louder voice than that? [Sermo 68:6, in Hamman’s PLS]

Many others followed Augustine, and far exceeded him, in trying to read both books.

It seemed obvious to all of traditional Christianity that the same God who had given us the Bible had given us the Book of Nature, too, and that each would lead inevitably to the same goal. At the beginning of the modern era, the great scientists all thought of themselves as theologians – the astronomer Johannes Kepler was a Lutheran; the chemist Robert Boyle an Anglican, Sir Isaac Newton an exotic occult Unitarian. All three wrote as much about God as they did about nature – and often (this is the part they really don’t teach in school) in the same books.

It is only in the last few centuries that people have started to divide science from religion, and even to act as though these two studies –these twin volumes on a single shelf – were somehow strangers, even enemies.

A dear friend of mine had parents who were often absent, and was raised by her grandmother. Grandma was an old county lady, as kind as the day is long, caring and wise, able to cook anything as long as it involved lard. She would do anything for you – as long as you didn’t mention dinosaurs. That one subject would set her off in the worst way. Dinosaurs, she believed, were a hoax, a fraud, a myth, their bones were a trick of the devil mischievously buried in the earth to test our faith. They weren’t real and never had been. Her church taught her that.

How did this happen? Explaining it all would take longer than we have, and is anyway the stuff of a class rather than a sermon. Let me just say this, perhaps a bit defensively: It wasn’t us Lutherans. Leibniz, Euler, Riemann. We invented modern science – and in the same centuries, not to brag, modern Biblical studies and modern philosophy. Scratch a German scholar of the old days, and you will find a Lutheran. Even today: one of America’s newest astronauts is the daughter of an old friend and deacon. Jasmin Moghbeli is an Iranian-American from Long Island, a Marine test pilot and a lifelong, churchgoing Lutheran.

But what about Genesis, somebody is probably asking. What about Darwin? Here’s the thing: before the modern period, most Christians didn’t read those opening chapters as a literal description of how the world was created. They could tell, even in the early days, the difference between poetry and prose, a philosophical fable and a bare recitation of facts. Most of us still can. We instinctively use one lens to read the news, another to read the editorials and third to read the political cartoons.

The fundamentalist urge to insist upon a single literal sense of every passage is a new a thing, not an old one. And it isn’t the path of tradition.

So when young people say (as about a quarter of those polled by the Barna Group did say, not long ago) that they are losing interest in Christianity because it expects them to believe things that science can prove are simply not true, it is a sign that they have only been taught this modern-day, fringe version of our religion. They have not yet been shown the depths of the ancient faith. If they knew who we really are, and what we really believe, they would find those things were not what they have been told.

It begins with one common, almost universal moment. We have all had the experience of looking into the night sky and shivering with a sacred awe, asking two questions: What is up there? That’s the science question. And What does it mean? That’s the faith question.

To that second question, Christianity offers an answer. In a word, it means Love. That, we believe, is what makes the Universe work, at least the Universe as we experience it (and our experience, as the philosophers say, shapes everything we can know about the Universe). That is where life comes from and where life leads to. And obviously, that’s not a scientific answer, to be weighed and measured, heated in a test tube or viewed through a telescope. It is a philosophical answer, a metaphorical answer, a poetic answer. And yet it is true.

Natural science can take us so far – but only so far. It can build a nuclear bomb, but it cannot tell us whether to use it; design a rocket, but cannot explain why a man should ride it into space instead of a robot. It can explain why people lie or cheat or steal, but it does not care if they repent, or seek forgiveness.

We do. The Scriptures do. That’s what they are there for. Not as a guide to paleontology or celestial mechanics, but as a guide to the life of loyalty and sacrifice, the life of mercy and mutual consolation. They are another response – not the only response, but a good and a beautiful one – to the night sky and the shiver of awe. Faith, like science, seeks understanding; faith, like science, seeks truth. One reads the book of Scripture, one the book of Nature, but both ultimately are assured of a single answer: the face of God, the meaning of the stars, the Love that holds all things together.

FacebookTwitterEmailLinkedIn
Previous
The Valley of the Uz
Next
Shameless Prayer