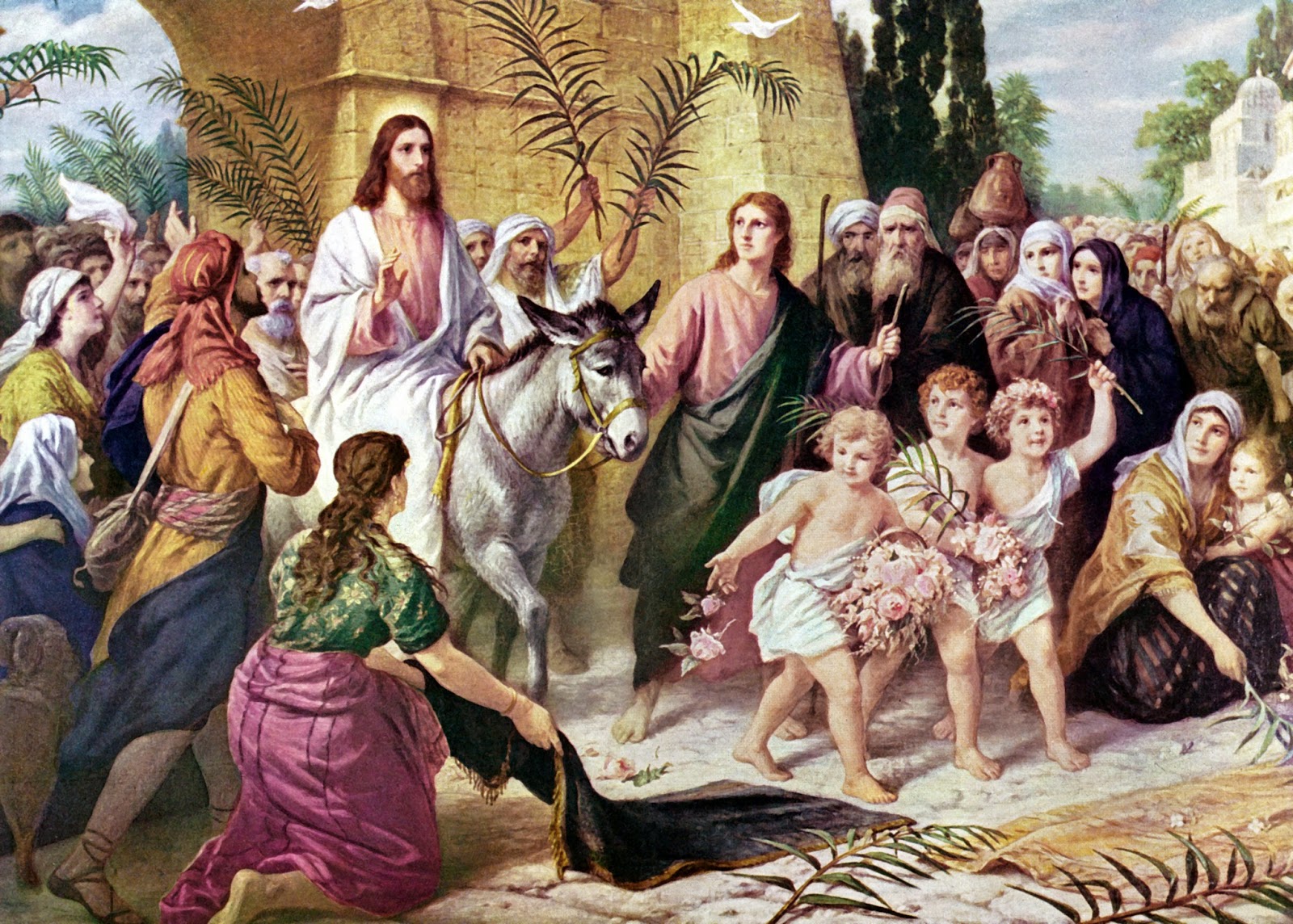 There was a game that people used to play, back in the Middle Ages. On certain days, they would reverse their roles. Kings might dress up like peasants, and vice-versa. One version of this game was called “The Boy Bishop.” On the Feast of the Holy Innocents, in some places, a choirboy would be chosen as bishop for the day; he would be given a peaked hat and a shepherd’s staff, he would enter the cathedral and even lead some of the prayers.

It was a masquerade, like Carnival in Venice or our Halloween, but with a purpose: the idea was to reverse the social hierarchy, at least symbolically — to take power from the mighty and give it to the meek.

And at first glance, the day that Jesus entered Jerusalem looks like just such a masquerade. They waved their palms and threw their coats on the ground before him, singing a Biblical coronation song. They treated him a like a king; but surely it was obvious to everybody that this was no king. He was a carpenter by trade, a wandering teacher by avocation, dressed in dirty traveling robes which were probably the only clothes he owned. And where a king would ride a white warhorse or be drawn in a gilded chariot, Jesus sat on the back of a donkey.

It was, clearly, a kind of joke, a parody of a real king coming home in victory after some great battle. It was, obviously, a game.

And yet, at the same time, it was no game at all. It was utterly serious. Jesus was showing us something important about himself, and more than that he was urging us to think about ourselves and each other in a new a way. His entry into Jerusalem may have been a sort of comic-opera costume ball, but it was at the very same time a lesson on the deepest kind of Christian spirituality.

People today – especially young people and college professors – talk about something called privilege. The word itself is familiar. It means access to goodies – money, jobs, respect – that a person does not earn, but gets simply by being part of a certain category. Kings get to live in castles, that sort of thing. But the conversation in our society these days isn’t about royal privilege; it is about male privilege, and white privilege, and things like that.

This is a touchy conversation. Some people feel attacked by the very concept, or at least misunderstood. And understandably so.

For myself, I long ago decided to simply own it. When somebody points out (often accusatorily, as though it were my fault) that I have lived a life of comparative privilege, I endorse them. They are not wrong. I am a straight white Christian man, born in the United States during the mid-20th-century, during our years of greatest international influence. I have so much privilege because of those accidents of birth, it is mildly disappointing to me that I do not poop gold and sweat diamonds.

Think of a man my own age and race that you might encounter in New York City, when you step into a subway car and find him lying on the seat, unshaven and reeking, wearing clothes that haven’t been washed in weeks, passed out in a pool of his own bodily fluids. How much privilege does that guy have?

Or the guy in Pennsylvania who graduated high school thirty years ago and went to work in the factory, and built his life around that factory – the family, the car, the mortgage. Then the factory closed and inside of two weeks he had no way to pay his mortgage. How much privilege does that guy have, when he walks into the bank, hoping to negotiate? Not a lot.

There’s plenty of room to debate the different kinds of social privilege, and to argue about how they work. But one thing the Bible is pretty clear about is that privilege exists; that some people have it, and some people don’t.

Indeed, some of the most famous passages in the Bible are about that very subject – and, specifically, about the way God plans to turn the tables, reverse the customary order of society. On Wednesday nights in Lent, we have gathered to sing Mary’s song, the Magnificat (Luke 1:46-55), which says that in Christ, God will cast down the mighty from their thrones, and lift up the lowly. God will turn the world upside down.

It is just like the Boy Bishop, except that it is no game. It is God’s vision for a new world, a world in which the old injustices have been done away with, and a better order has come to be.

And there is Jesus, riding on a donkey, looking like a clown, like a character in some comical street theater. Until you look closely.

God. Made. Flesh. Right there in that phrase, the new order is revealed. For God, the almighty, to become weak; the immortal, to take on our mortal, kill-able human flesh – that is the greatest role reversal of all. In Christ, God has set aside his own majesty, to share our own fragility. In Christ, God has turned the world upside-down.

And that is Christian spirituality, in a nutshell: to follow a God who can set aside godliness, who can stand in solidarity with the weak and the oppressed. To use whatever we may have for the good of those who need it.

Here is an example. In 1967, a Navy pilot was shot down and captured. It was John McCain, who is now a senator. But in those days he was a prisoner with a broken shoulder. One of his tortures at the Hanoi Hilton was that the North Vietnamese Army would rebreak his shoulder, over and over.

Then, discovering that he was the son of an admiral, they decided to release him at once for PR purposes. But the prisoners had a policy — you would be released in the order you were captured. So when the NVA told McCain that he was going home, escaping the torture, the isolation and the deprivation, he refused. He was loyal to the release protocol. He was loyal to his brothers in arms.

He checked his privilege.

He surrendered his power.

It is an admirable thing. And how much more admirable for the son, not of an officer, but the Son of God, to set aside his majesty, and stay with us. To ride the donkey into town; to be betrayed and beaten and killed, yes, all that; but even if he had never done those things, just to be one of us. To catch a cold like us, to get infections like us. To be scared of the dark, to weep when he is sad, just the way we do.

How beautiful is it for the mighty to stand in solidarity with the meek? It is more beautiful than a sunrise, more lovely than the stars at night. It is as beautiful as Christ himself, who calls us to follow him, and to stand with the man sleeping on the subway, or the one who lost his job, or the addict, the refugee, the beaten wife or abused child. What can be more beautiful, more precious, more perfect than to do as Christ did – to turn the world upside down, and use whatever good we have in life for those who have so much less?