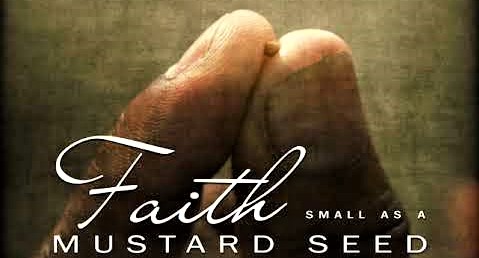 Our Saviour is incredibly pleased to have you join us for live in-person worship inside the Nave and Sanctuary on Saturday, October 1 at 5:30 pm (casual with Voices of Praise), and Sunday, October 2 at 8:00 am (simple service) and 10:30 am (traditional with choir and/or organ music). The Saturday evening and Sunday 10:30 am services will will also be online via Facebook Livestream!

(Fast forward to 8:45 in the recording for the beginning of service)

(Fast forward to 7:25 in the recording for the beginning of service) 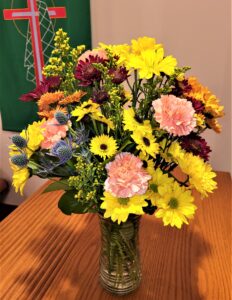 Altar Flowers for this weekend’s services were donated by Fred & Marcia Koozer in celebration of Karen Olson’s birthday. ❤

There was a fire raging across the world.

By “world,” I mean the Roman Empire, which was in the first century of our era at its very peak, stretching from Spain to the borders of Iran. It was a vast empire, governing the lives of millions – but remember that it governed them with violence.

Nations did not join because they loved the Roman Legions, but because they feared destruction by them.  More than a third of the Empire’s people were held in slavery; when some rebelled, the highways were decorated with their crucified corpses. We talk about the glory that was Rome, but we should rather talk about the shame, the brutality, the terror, because that’s what Rome really was. A vast empire? Yes; but it was on fire.

And the name of that fire was Jesus.

Look at our Gospel today. It’s a description of what new life looks like for a Christian.  Don’t be fooled by that part about how we are  “worthless slaves;” it makes sense if we hear what came before it.

Jesus says to his disciples, first, do not harm the “little ones,” that is the weak, the humble, the poor. In a society where the powerless were treated as human garbage, it was a big deal to say they were important; that the poor widow had a dignity no less than an Empress.  And yet, says Jesus, this is no big deal, it does not make you special if you acknowledge this.

Then he says that if your brother offends you, forgive him, not once or twice but seven times.  These words seemed strange in an empire ruled by harsh laws, quick to mistake violence for justice.  Yet again says Jesus, forgiveness, mercy, should not be the exception, but the rule.

Dignity.  Forgiveness. Faith. This was the vision, this was the new life that the missionaries spread, that the people yearned for. This was what mission looked like in the beginning of the church, and offering these things was what made the church grow.

Our Saviour is a mere sixty years old, a baby by church standards.  It is about as old as Christianity itself was when St. Paul, an aging missionary, wrote to the young preacher Timothy in our second lesson, and said – what does he say?  Rekindle the gift of God.

In other words, don’t let the fire go out; stir up the embers, in yourself, and in the people around you.  Because we all know how hard it is to keep the fire of our faith burning.  I’m sure the first Christians felt it as much as we do today. You join a church, filled with hope; but after a while, you find the people all too familiar, the preacher dull, the coffee bad.  For whatever reason, the flame flickers. That is when you must stir the coals, blow the bellows, add some wood – whatever it takes to rekindle that old flame, to make that fire blaze again in all its power.

In every age, the church of God needs a revival.  It was true even at the beginning, in the very first century of our era – and it is true today.

Especially today, my beloved. Especially today.  Changing times have put us – Our Saviour, yes, but every church in this nation, if your look at the statistics — in the place of Timothy’s first-century church.  The flames need to be rekindled.

We, like churches all over our country, are challenged by a culture that each year seems to turn further away from the church.  But we can rise to this challenge, because we are – each one of us – missionaries.

People think a missionary stands on the street corner shouting, or knocks on your door to pass out pamphlets, or worse yet goes into the jungle and offers people cans of Spam if only they will wear pants.

But no. A missionary of the Gospel offers people a quiet word of hope, the promise that they can have what they secretly want, what they desperately need – community and purpose, love and faith; above all, a new life.

In ancient times, the Word of God spread because people were desperate to hear it. And I believe they are just as desperate today. I see it in every argument among anxious people, in every Twitter battle or political rant. People yearn for a word that will calm their fears and teach them a better way to live. They yearn –now as in the days of Rome — for the promise of dignity, forgiveness, and faith.

The challenge is that they have not heard that message from the church, not in a long time.  Christianity in our culture has grown complacent, fat and happy, comfortable with its privileged place in society.

But a missionary church – like the church of Paul and Timothy – is something different.  It is the enemy of a wayward culture, the friend of lost souls and broken spirits. Above all, it is the voice that whispers into each person’s ear, saying “You matter. You are beloved. You belong to God.”

So let us speak this word, loudly and clearly.  Our Saviour is nothing if not a mission church; that is our heritage and, throughout our history, it has been our passion.  Let us all leave here, burning with the ancient flame, to speak the ancient word to anyone who will hear it — the word of human dignity, of holy love, of faith that transforms the world and makes it new.

Through Christ our Lord.  Amen.