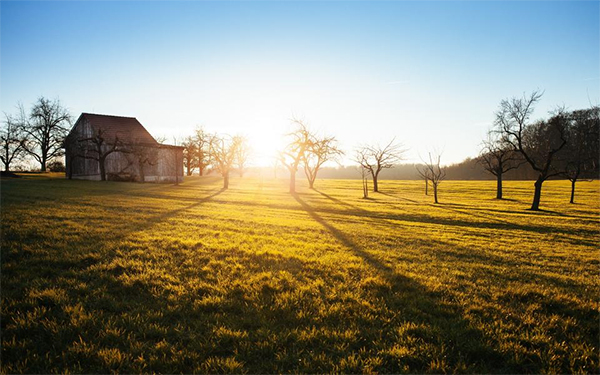 Prayers from All the World and from All Our Voices, United in Love by God

Listen to the birds of the air—they don’t plant seeds or harvest grain and save it in barns, but God takes care of them!  So, Jesus, that wise teacher, reminded us that God will take care of us. Let us listen to them cry out in praise to the God who cares for them! (silent pause)

As I looked forward to listening to those birds while the sun rises this morning, I realized I have never led a service for this National Day of Prayer.  Therefore, I investigated its history and learned something interesting.  Going all the way back to the 1775 First Continental Congress, our nation has had a longing for prayer voiced in different traditions, from different points of view.  When one in that Congress suggested opening such an auspicious occasion with prayer, someone complained.  They said, “We don’t all pray the same way!  We don’t approach God the same way!  How can we pray together?”  Apparently, John Adams quieted those concerns in this way:

“I can hear the prayer,” [Adams] said, of anyone “of piety and virtue who is . . . a friend to his country.” He went on to suggest that a clergyman of a persuasion other than his own open the First Continental Congress with prayer.

And so, President Ronald Reagan, in 1983 and again in 1988 proclaimed that this day would be set aside by all people in the country, no matter what faith, for prayer. He wrote:

He said we should pray for the love of God, seeking God’s guidance and grace and forgiveness, for the Peace of God for our nation and for all humankind, forever.

I was struck by how universal this day was set aside to be—from all of us—and I love that.  I was also struck by how big the world seemed in at least one of the presidential proclamations calling for this National Day of Prayer.  When Reagan called us to pray, he included prayers from all of us from all over the world.  “Let us join together, Americans all,” he said, across the country’s businesses, homes, government offices, places of worship—and everywhere Americans are stationed!  Why, that’s a lot of time zones to cover!

And so, I imagined Navy Chaplains somewhere near China starting their day with a sunrise service for unity, peace, and forgiveness.  I imagined CIA agents in some unwritten place praying for wisdom, or business leaders in Hong Kong praying for peace and love this morning. If so, that was right about when our time showed the sun setting last evening!  Therefore, they are getting to their evening prayer right about now, as we pray with the birds welcoming the new day.  And I thought of how, across the globe, people have been praying with the rising of the sun and the setting of the sun.  That brought me to our Song today.  What if, right about now, those chaplains are leading evening prayer with this song: Sing stanza one: The Day you gave us, Lord, has ended.

And what if they go on to sing about us, right here, singing God’s praises at the sunrise, like we’re about to do and they did half a day ago.

In a moment we will sing the rest of that song as if we are singing evening prayer with people at sunset and they are singing matins with us at the sunrise.  As we sing, let us think about what it means—God never slumbers nor sleeps, and prayers for God’s help roll on and on, with God listening and guiding.  God is answering our prayers, no matter where or when we are.

Therefore, let us pray for peace in this world.  Let us pray, as we’ll do at the clergy prayer breakfast in a little while, for an end to human trafficking.  Let us pray that all people will know us by the love that we show each other and them.  Let us pray, for…what would you have us pray for?  What things need God’s help across all our faiths, across all our time zones, throughout all of time?  After we sing, we will have a time of prayer to lift those prayer up. Let us pray together, in faith knowing that God hears and answers, in God’s holy time, through the power of the Holy Spirit and the Uniting Love of Jesus Christ our Lord.  Amen.

The Day You Gave Us, Lord, Has Ended

The day you gave us, Lord, has ended;
the darkness falls at your behest.
To you our morning hymns ascended;
your praise shall hallow now our rest.

We thank you that your church, unsleeping
while earth rolls onward into light,
through all the world its watch is keeping,
and never rests by day or night.

As to each continent and island
the dawn leads on another day,
the voice of prayer is never silent,
nor dies the strain of praise away.

The sun, here having set, is waking
your children under western skies,
and hour by hour, as day is breaking,
fresh hymns of thankful praise arise.

So be it, Lord; your realm shall never,
like earth’s proud empires, pass away;
but stand and grow and rule forever,
till all your creatures own your sway.

Proclamation 5767 of February 3,1988 National Day of Prayer, 1988
By the President of the United States of America

Americans in every generation have turned to their Maker in prayer. In adoration and in thanksgiving, in contrition and in supplication, we have acknowledged both our dependence on Almighty God and the help He offers us as individuals and as a Nation. In every circumstance, whether peril or plenty, whether war or peace, whether gladness or mourning, we have searched for and sought God’s presence and His power. His blessings and His protection. His freedom and His peace, for ourselves, for our children, and for our beloved land.

That was surely so at the very beginning of our Nation, in the earliest days of our quest for independence and liberty. It could only be thus, for a people who recognized God as the Author of freedom; who cherished the ancient but ever new words of Leviticus, “Proclaim liberty throughout all the land unto all the inhabitants thereof and who cast those words where they would ring out forever, on the Liberty Bell; who affirmed along with Thomas Jefferson that the God Who gave us life gave us liberty as well.

So did they believe, those who gathered in Carpenters’ Hall in Philadelphia in 1774, the members of the First Continental Congress. They had come together, in times that tried men’s souls, to deliberate in the united interests of America and for our “civil and religious liberties.” John Adams later wrote his wife Abigail about what followed: “When Congress first met, Mr. Gushing made a motion that it should be opened with prayer.” Some delegates opposed the motion, citing differences in belief among the members; but Sam Adams, that bold lover of liberty and our country, arose to utter words of healing and unity.

“I can hear the prayer,” he said, of anyone “of piety and virtue who is . . . a friend to his country.” He went on to suggest that a clergyman of a persuasion other than his own open the First Continental Congress with prayer.

And so it happened. Because Sam Adams gave voice to all the goodness, the genius, and the generosity that make up the American spirit, the First Continental Congress made its first act a prayer—the beginning of a great tradition.

We have, then, a lesson from the Founders of our land, those giants of soul and intellect whose courageous pledge of life and fortune and sacred honor, and whose “firm reliance on the protection of Divine Providence,” have ever guided and inspired Americans and all who would fan freedom’s mighty flames and live in “freedom’s holy light.” That lesson is clear—that in the winning of freedom and in the living of life, the first step is prayer.

Let us join together, Americans all, throughout our land. Let us join together, in factories and farms, in homes and offices, in places of governance and places of worship, and in outposts everywhere that service men and women defend us. Let us, young and old, join together, as did the First Continental Congress, in the first step—humble, heartfelt prayer. Let us do so for the love of God and His great goodness, in search of His guidance and the grace of repentance, in seeking His blessings. His peace, and the resting of His kind and holy hands on ourselves, our Nation, our friends in the defense of freedom, and all mankind, now and always.

By joint resolution of the Congress approved April 17, 1952, the recognition of a particular day set aside each year as a National Day of Prayer has become a beloved national tradition.

NOW, THEREFORE, I, RONALD REAGAN, President of the United States of America, do hereby proclaim May 5, 1988, as a National Day of Prayer. I call upon the citizens of our great Nation to gather together on that day in homes and places of worship to pray, each after his or her own manner, for unity in the hearts of all mankind.

IN WITNESS WHEREOF, I have hereunto set my hand this third day of February, in the year of our Lord nineteen hundred and eighty-eight, and of the Independence of the United States of America the two hundred and twelfth.